Most parents probably don’t think that the dresser they purchased to store a child’s clothes in, or the chest they placed in their newborn’s nursery, could pose dangerous risks to their children. But the sad and scary reality is that according to the U.S. Consumer Product Safety Commission (CPSC), “A child dies from tipping furniture, appliances or TVs every two weeks.” This alarming statistic was found by Kids in Danger (KID), a non-profit organization dedicated to protecting children by improving product safety.

Testing the Problem, Identifying the Outcome

The majority of children’s furniture products are not required to conform to safety standards.
KID compiled data from incidents reported to CPSC by various sources and from the National Electronic Injury Surveillance System (NEISS), and their findings concluded:

So, while there is a voluntary tip-over standard, these statistics show that head injuries and death caused by furniture tipping over indicates that the current safety standard for dressers and chests may not be stringent enough.

In a quest to get manufacturers to design, test and sell safer furniture, and with the help of a grant from the Centers for Disease Control, KID engaged UL to be their testing resource for a research project focusing on tip-overs of dressers and chests. “We are truly grateful for this opportunity today to advance public safety,” says Barb Guthrie, vice president and chief public safety officer at UL. She continues, “As an independent, science-based organization we are humbled to have the opportunity to provide the laboratory and the expertise necessary to do this critically important work.”

KID designed the testing protocol, purchased the items for testing and worked with a UL testing engineer to conduct the test plan in our facility in Holland, MI. The test protocol consisted of the current ASTM F2057 standard for tip-over stability, plus additional methods designed by KID. These additional test conditions and methods consisted of applying more weight to the dresser (simulating larger children), drawers were full of clothes, furniture was placed on carpeting as opposed to hard flooring, televisions were placed on top of the furniture, and additional drawers were opened simultaneous with weighting one drawer. These additional tests were intended to be more representative of real-world scenarios.

The results were announced at a live press conference on August 9, 2016 at UL’s headquarters in Northbrook, Illinois. This press conference was a joint effort between UL, KID and Shane’s Foundation, another non-profit dedicated to child safety and prevention of furniture tip-over, and featured a demo “crash test” of furniture tip-overs. In addition to Barb Guthrie, speakers included Nancy Cowles, executive director at KID, Lisa Seifert, founder of Shane’s Foundation and Congresswoman Jan Schakowsky, a leader in children’s safety, along with many members of UL’s furniture division and the press.

Matt DeKock of UL Environment and Nancy Cowles from KID demonstrate the danger of dresser tip-over using a doll and weight to show instability.

Some of KID’s findings of their data analysis include:

Testing results point to widespread non-compliance with current voluntary standards as well as to additional typical use scenarios those standards do not address. With the help of the “crash test” dresser tip-over demo at the press conference, and the published report of their findings, KID hopes that manufacturers will implement the following recommendations:

The report goes on to make specific recommendations on development of a stronger standard including increasing the weight used in testing to protect children up to and including age 5 using the most recent anthropometric data, and adding a requirement that furniture would remain stable when all drawers are filled to capacity with clothing, as KID did in its tests.
As a result of UL’s testing expertise, facilities and dedication to public safety, and KIDs Furniture Stability report and recommendations, the light shines brighter on this critical issue of tip-overs affecting the residential furniture industry and the safety of our children.

Questions on furniture testing and protocols? Contact UL FurnitureNA@ul.com or call 616.928.0791. Video of the press conference is available under Videos on UL’s Facebook page. 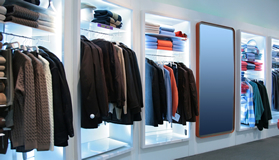